Alexander and I went to our first game of Ice Hockey today! It was very exciting. It was between the local Gentofte team (actually next-door to where I play cricket these days), and Herning. After the full 60 minutes the score was tied on 3-3. Luckily, Gentofte scored in the 5 minutes of extra time and won the game!

At least I think that is what happened. I don’t actually know the rules. 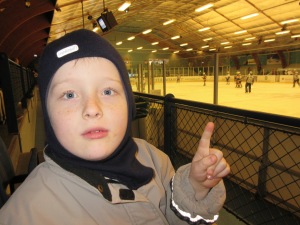